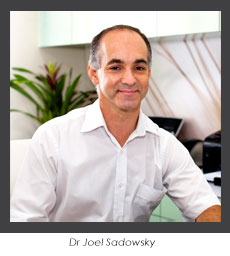 Joel Sadowsky is a Neonatal Paediatrician who has focused solely on looking after newborns since 1998. Joel’s experience and gentle nature makes him a perfect choice to care for sick and premature babies, as well as healthy babies on the postnatal wards. Due to his experience in numerous level 3 units, he specialises in helping babies who require specialised care. Joel will continue to care for your baby during the first 6 weeks of life or as required.

Joel is a native of the beautiful city of Cape Town, South Africa where he completed his medical degree. He then went on to spend three years in England working in paediatrics which went on to form the basis for his ongoing passion for neonatal paediatrics. After completing his general paediatric training in Auckland, New Zealand, Joel came to Australia to complete his advanced neonatal training at the Royal Women’s Hospital in Melbourne. Here he developed his additional skills for performing neonatal ultrasound and echocardiography. Joel’s career has taken him back to New Zealand and after 8 years of practicing in Wellington, decided to come back to Australia where he practiced in the Mercy Hospital for Women and the Royal Women’s Hospitals. He has since moved into private practice where he practices at St Vincent’s Private, Epworth Freemasons and Northpark Private hospitals. Along with his ongoing care of babies, Joel also spends time teaching and training medical and nursing staff to provide the best care possible for all new borns. In his precious free time, Joel enjoys being with his family.